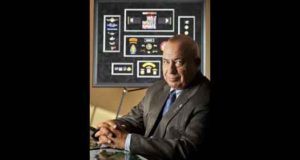 Nebraska’s ornate legislative chamber, with its stately columns and leather chairs, is a whole world away from the stark battleground in Afghanistan where life, not a legislative bill or re-election, is at stake.

The Legislature is a relatively comfortable and orderly place where the pace is generally slow and deliberate, not the action-packed adventure of challenge and danger that has characterized Tom Brewer’s life.

Only one member of the Legislature is a Native American; only one wears a Purple Heart on his lapel. It is him.

Brewer was shot six times during a spontaneous firefight with the Taliban in 2003 at a desolate site near Ghar Mountain that local citizens referred to as The Bone Yard.

Twelve broken ribs, a broken sternum, a broken nose, gunshot and shrapnel wounds across his body, all of that compounded by a bumpy ambulance ride in which he bounced facedown on the floor with his hands strapped to his waist watching his blood stream across the surface.

His stretcher had not been secured and after it crashed to the floor, Brewer was face-to-face with the possibility that he was watching his life flow away.

In 2011, he was wounded again during his sixth tour in Afghanistan when shrapnel from a rocket-propelled grenade ripped through his body.

This state senator has parachuted with German soldiers as part of a NATO exercise, served as a U.S. liaison officer with the Russian Army during a military exchange program, flown Cobra attack helicopters, won sniper championships, run 39 marathons.

This is a whole different dude.

“Yes,” Brewer says, “everything about me is different.”

Now, Brewer is determined to master his next challenge: study this new terrain and its individual actors, learn the tactics of interacting outside the structured and disciplined military sphere, form working relationships, become an effective state senator.

“I tend to be cold,” he acknowledges.

But Brewer credits Sen. Patty Pansing Brooks of Lincoln with “kind of chipping away at that with her big heart,” which he says is on full display in her determined advocacy for the Native Americans whose lives are being ravaged by alcohol on the streets of Whiteclay, but also on a number of other legislative issues.

“We have become very close,” he said. “A lot of good things have rubbed off on me.”

Brewer comfortably presided over a hearing of the Government, Military and Affairs Committee a week ago, encouraging a number of the people who came to voice their views on a voter photo-ID bill, with special praise directed at a young student from Creighton University.

His assignment to the Banking, Commerce and Insurance Committee is more of a challenge, Brewer said. That subject matter opens an entirely new world.

“I’m glad I’m here,” Brewer said as he moves into the third month of this newest challenge in his life.

“I’m figuring out how to pack the parachute,” he said, “although I’m not completely confident yet that I’m ready to step out the door.”

Brewer’s life story is unlike that of any senator from its very beginning.

Leaving the Pine Ridge Reservation where he grew up as an Oglala Sioux was “by far the best decision of my life,” he said.

“Those who stay are doomed to reservation life, to a life of nothing,” Brewer said. For young Native Americans, there are two ways out: find a way to go to college or enlist in the military.

Brewer chose the latter course and retired from the military as a U.S. Army Reserve colonel, having served 36 years in uniform.

In 2014, he decided to seek western and central Nebraska’s seat in the House of Representatives, challenging incumbent Rep. Adrian Smith in the Republican primary, battling a suddenly diagnosed case of leukemia at the very beginning of his campaign and spending his life savings along the road to defeat.

“Maybe I didn’t fully understand what was involved,” Brewer said.

But that experience didn’t end his quest for a new role in public office.

Last year, he decided to challenge incumbent Sen. Al Davis of Hyannis in the 43rd Legislative District, a vast swath of northwest Nebraska that’s larger than a number of states.

It’s cowboy and cattle country, once buffalo country, home of the storied Sandhills, a broad land with a big sky.

Brewer returned to his roots in Gordon and launched a memorable monthlong, 500-mile campaign ride through the district on muleback accompanied by 11 fellow veterans.

That attracted the attention he needed to deliver his message the rest of the way.

“I’m conservative,” he said, “and that’s a good fit for the district.”

Brewer has embraced lengthy legislative days that begin at dawn in his first-floor Capitol office and carry him through evening events.  He’s taking the measure of his colleagues, pointing to one of them, fellow freshman Sen. Mike Hilgers of Lincoln, as “an amazing young man.”

“There are very few things that Sen. (Ernie) Chambers says that I don’t have appreciation for,” Brewer said. “I respect his knowledge and experience in life.”

Brewer says he wants to bring his own unique lifetime of experience to the Legislature now.

“It’s about leadership,” he said. “Understand what right looks like. Have the courage to be different at times.

“Stand tall for what’s important in your district. Take the heat.

“People have put their faith in you — especially when they make a decision to change leadership.”

Brewer said he understands agriculture — he grew up on a farm and was a state Future Farmers of America officer — and he’ll be pushing hard for property tax relief. He has proposed a two-year moratorium on commercial wind energy development in Sandhills legislative districts to defuse an intensely emotional argument among constituents, but that bill appears to be stuck in the Legislature’s Natural Resources Committee.

When senators are in session, Brewer often is studying material under his desk lamp while listening to debate.

“I don’t speak much on the mike unless I have a purpose,” he said.

Last Thursday, he had a purpose, rising to argue forcefully for Pansing Brooks’ bill to create a task force to study public health issues related to the flood of alcohol sales in Whiteclay. The measure won 42-0 first-round approval.

Yes, Brewer is willing to acknowledge, he lives with pain. But he doesn’t dwell on it or allow it to shape or limit his life.

There are obvious consequences to being “all broken up, beat up, blown up,” he said, “but pain is something I do pretty well with. I don’t take medication.”

And, yes, sleep can be difficult, he said, “and I can only sit for a while because of back pain, but I just get up and move around.